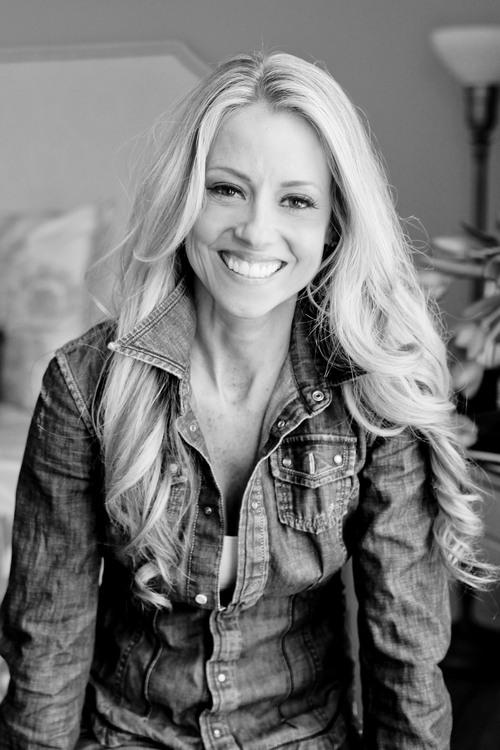 There really is not another HGTV television personality like her.  She has extreme passion for what she does and the audience can’t help but notice.  Nicole Curtis can drive a bobcat, wire a chandelier, and swing a sledge hammer.  She frequently does all of these things and more in one day.  When I grow up, I want to be just like her!

Here is a reprint about her from the Minneapolis Star Tribune:

She has a hot TV home-improvement show and her own crew, but that doesn’t mean Nicole Curtis is immune from typical homeowner headaches.

During the holidays, the star of “Rehab Addict” got hit with a very Minnesota problem: frozen pipes after the furnace failed in her century-old Uptown Minneapolis home.

Curtis, per usual, was a woman of swift action and words, ripping out her plumbing and sharing the saga with her legion of Facebook followers. “I basically just gutted my whole house,” she said.

Salvage is in Curtis’ blood. Growing up near Detroit, her family ran “a garbage business,” she said. “We’d drive around neighborhoods, picking up stuff people didn’t want.” She started acquiring DIY skills as a child. “My dad would say, ‘We’re stripping furniture today.’ You just did it.”

Curtis first aspired to become an attorney. But after working three jobs to buy her first house, in Florida, when she was 18, she chose a different path. “I got a taste for being on my own and having money,” she said. “It was important for me to establish myself.”

She was already established as a real estate agent, rehabber and interior designer — buying, overhauling and selling houses — when she was first approached about doing a show. “It was hard to convince her,” said Steven Lerner, senior VP of original programming and development for DIY Network and HGTV. “We had to ask, ‘Can we follow you and not disrupt your life too much?’

“I wasn’t sold on it,” Curtis admitted. She didn’t want to do a typical home-transformation show — “Look! Twenty-two minutes later, here’s a kitchen!” Instead, she wanted to show the nitty-gritty details of rehabbing old houses — mouse droppings and all. “I wanted to keep it raw and real.”

Curtis’ passion for old houses combined with her hands-on skill with power tools, gives her credibility with viewers, Lerner said. “She’s actually getting dirty and doing the work.” And although she relies on a crew, she’s clearly the one in charge. “She’s a real person, in ripped jeans, glasses and a ponytail,” Lerner said. “If we prettied her up with makeup and curlers, I don’t think people would take her as seriously.”

But the petite blonde with the flowing mane and telegenic smile can also bring the eye candy, getting in touch with her inner glamour girl when she takes off her construction gloves. “She dresses up when she’s finished a house and is showing it,” Lerner said. “Then she’s blooming.”

Her latest projects are two just-rehabbed houses in north Minneapolis, one a 1929 bungalow boasting its original built-in buffet, and the other a former duplex, built in 1883, that was boarded up, its windows shot out, when she took it on and converted it back into a single-family home.

“This is our first time on the North Side,” Curtis said. People warned her against investing there, she said, but that only made her more determined. “I always want to be where people tell me not to go. This is where the housing stock is in the most danger. North Minneapolis has the highest demolition rate in the city. We’re trying to build this community back up. It’s been easy pickings for slumlords.”

Curtis has become skilled at mobilizing people, said her friend Beth Rutledge, education coordinator for the Preservation Alliance of Minnesota. “Passion without direction is pointless, and she’s able to get things done. She’s resourceful as hell.”

Rutledge first met Curtis at one of her open houses, started chatting and knew she’d found a fellow old-house geek. Curtis is “a lot busier now” that she has the TV show, but other than that, she hasn’t changed, according to Rutledge. Asked to pick three adjectives that best describe her friend, Rutledge chose “fearless, smart and big-hearted.”

Home base: A Detroit native, Curtis divides her time between her hometown and Minneapolis, where she lives in a 1904-built house in Uptown.

Lives with: Son Ethan, 16 (“he rebels by having a super-neat bedroom with all modern furniture,” Curtis said), and rescue mutts Lucy and Max.

Salvage queen: In addition to repurposing materials she finds in old houses, Curtis is known for “adopting” orphaned stuff that people drop off at houses she’s working on. “We get doors, sinks, windows — like a baby in a basket on the church steps, we find a home for it.”

Up next? A Nicole Curtis houseware line featuring pillows, drapes, shower curtains and bedspreads. “I’m still trying to find a manufacturer. It’s a challenge to have everything made in the USA.”

If you are a regular viewer of Rehab Addict, then you have seen Nicole wear a t-shirt with this logo.  A friend gave her the shirt for her birthday and then people started writing in to ask where she got it.  She decided to sell them and start a foundation with the proceeds.

I checked her web site:  www.nicolecurtisdesign.com and  right now, they are SOLD OUT!  The money went to people who couldn’t pay their utility bills.

Here are some photos of rooms that Nicole has completed:

She makes it a point to use the original wood floors and woodwork if it is at all possible. The above picture came from the Dollar House.  For one dollar the city sold her the house as long as she signed paperwork promising to restore it.  The fireplace was discovered behind a layer of dry wall. 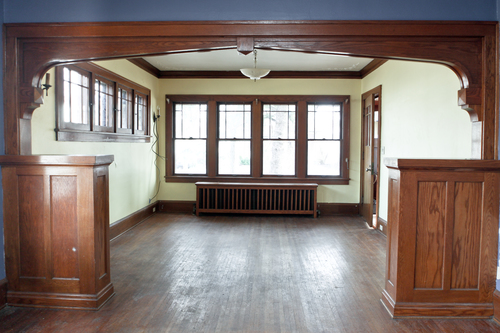 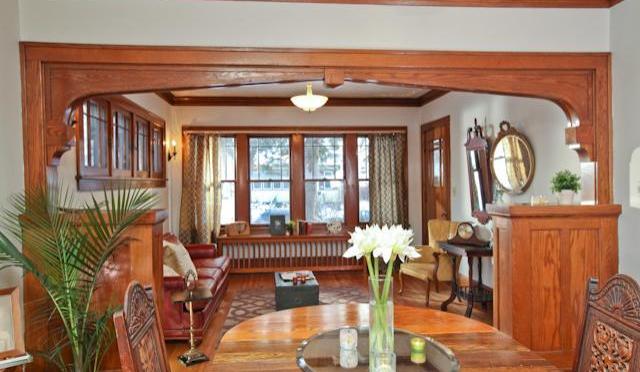 She was able to save this plaster medallion in the ceiling and the medallion over the fireplace: One winter the pipes froze in Nicole’s home.  She was lucky that this dining room mirror was not damaged.

Here is a home before it was restored.

…and here it is after:

Very cheerful exterior of a finished home. Nicole tries very hard to save leaded glass and stained glass.  This window is original to the house.

Tune into HGTV on Thursday nights and you can watch “Rehab Addict” and in the process you will learn something.  Like Nicole Curtis, you might become addicted to rehab.