Many years ago my husband’s parents introduced us to a man who became a trusted friend.  I always thought that his last name, “Smalls,” was unusual.  I did not know until about five years ago how unusual and brave his ancestor Robert Smalls was.

Robert Smalls was born as a slave in Beaufort, South Carolina on April 5, 1839 in a cabin behind his master’s house at 511 Prince Street in Beaufort..  His mother, Lydia, was a house servant for plantation owner John Mckee.  As a boy, Robert taught himself to read and write with the help of a local school teacher. Historians believe that his father was the son of John Mckee, Henry.

Robert became the favorite of  Henry Mckee who inherited his father’s estate.  Robert carried his master’s bow when Henry went hunting, rowed his master’s boat and was even allowed to work outside of the plantation for the sum of $15.00 a month.  He was allowed to keep $1.00 of his wages.

His mother, fearing that he was receiving too much favoritism, took him to the local jail to witness beatings of slaves and to see local slave auctions.  She wanted him to understand what slavery was and wanted to be sure that he was opposed to it.

When Smalls was 12 years old the McKee family moved to Charleston.  Robert met Hannah Jones when he was 17.  Hannah was a slave hotel maid.  Robert attempted to buy her freedom, but was unsuccessful.  In 1856 he and Hannah married.
They had a daughter and a son who died at the age of two.  Hannah and Robert were allowed to live in a small place of their own.  Robert was a dock worker, sail maker, and he eventually worked his way up to what is the equivalent of a boat pilot.  He knew the river and the harbor very well.

In the fall of 1861, Robert Smalls was assigned to steer the CSS Planter, a lightly armed Confederate military transport.  From the harbor Smalls and the crew could see federal ships blockading the harbor.  At about 3 a.m., when the white officers went ashore, Smalls put on the captain’s uniform and he and the crew carried out a prearranged plan.  First, they stopped to pick up Hannah and other family members.  Then, with the captain’s hat pulled low over his eyes and folding his arms as the captain usually did, he took the ship past five Confederate forts without incident.  He blew the whistle the correct number of times at each fort and aroused no suspicion. He flew a white bed sheet as a sign of surrender, the same sheet he had asked his wife to bring with her when he got past the Confederate forts and was approaching the Union blockade. He surrendered the Planter and its cargo to the United States Navy.  He and his family were free!

Smalls, age 23, became a hero in the North.  He even met Abraham Lincoln and Smalls gave him a first hand account of the action.  Eventually, the U.S. government gave Robert Smalls the sum of $1,500.

During the Civil War Smalls became the first black pilot of a union ship.  He guided the Planter into battle.  For his bravery, he was promoted to the vessel’s captain.

After the war he used his $1,500 to buy 511 Prince Street, the home of his former masters.  His mother, Lydia, lived with him the rest of her life.  He even allowed the elderly widow of his former master to move back into the house that had been her home for so many years.  He helped found a school for black children, and in 1847 he was elected to the United States House of Representatives!  Following his time in the legislature, he was appointed the U.S. Collector of Customs in Beaufort and he continued to live as owner of the house where he had been a slave.

Robert Smalls stayed politically active into the twentieth century and died in 1915 at the age of 75.

This is an image of the house which Robert Smalls bought, the former home of his slave master.  It was recently for sale for over one million dollars. 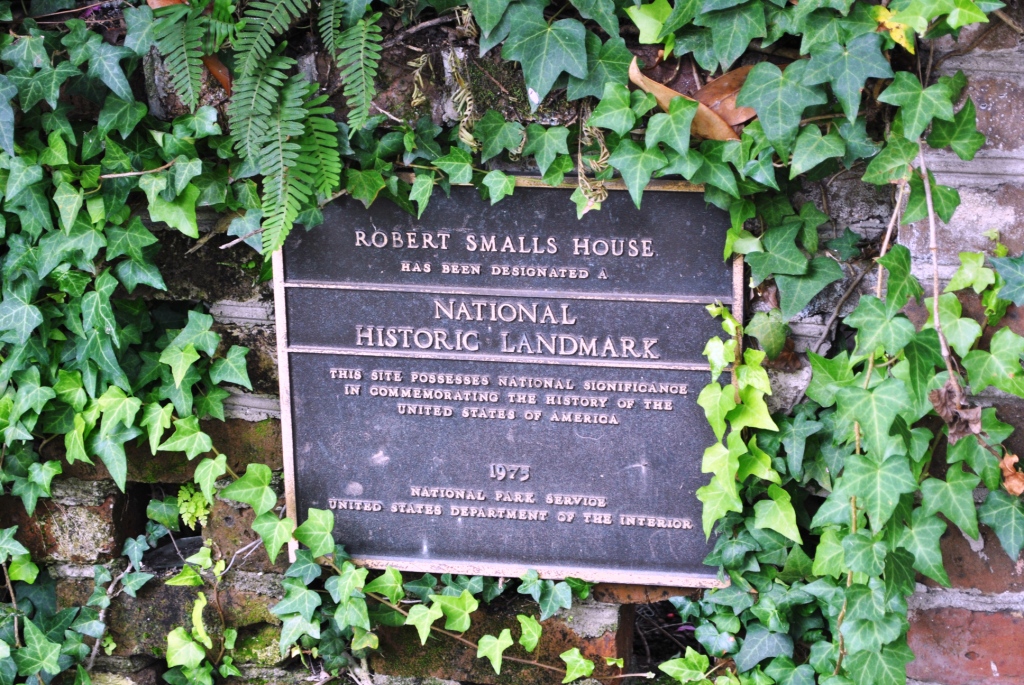 via Houzz.  www.allisonramseyarchitect.com
While visiting the Charleston Historical Museum, I found this tribute to Robert Smalls:

This marker is in Charleston, South Carolina:

I wonder how many historical markers I have walked or driven past without a second thought.  I am going to start paying more attention to them and I know that I will uncover information that is important to our country. I hope that you will do the same.